During summer and early fall of 2011, I built several small Rocket Heaters of only 4x4 inches, the first one steel duct throughout, with a masonry “bell” to replace the cob bench.

I used a Testo 330-2 gas analyzer to establish the relative performance figures. After a month or so experimenting, I came to the conclusion that the cyclone needed quite a strong draft from a large chimney and strong winds. So the cyclone was ditched and the Rocket Heater was put to more tests and changes in an attempt to improve upon its already excellent qualities. The pupose of the yests was to find an excellent combustion chamber to use in a masonry stove in our new house-to-be in a couple of years. 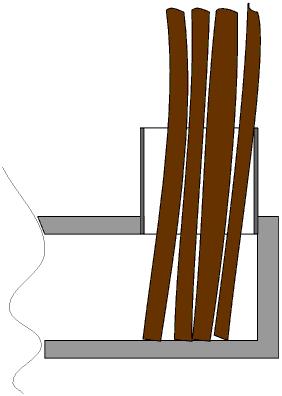 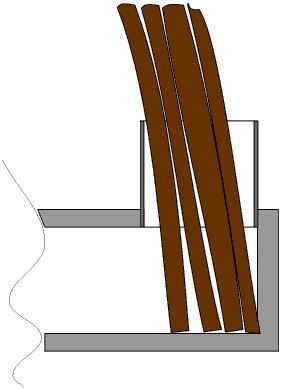 All subsequent test versions of my 4-inch Rocket Heater had some disadvantages; some did better than the plain by-the-book one of the same size in very specific circumstances such as high winds. The main goal of all this work was to persuade the stove to stabilize its spiky behavior, in that every time the fuel shifted down or fresh fuel was added, an overload occurred in the producedhydrocarbons. These hydrocarbons couldn’t be burned by the stove immediately and the peaks in the CO level were large enough to be accompanied by smoke. The stove was capable of delivering very nice figures, but it wasn’t able to do so in a reliable way. If I could stabilize this, I would be glad to use it as the combustion chamber in our new masonry stove.

When I’d let the fuel in the Feed Tube lean to the side of the Burn Tunnel (see drawing at right), the most obvious shortcoming of this stove was shown by the Testo. It proved to be possible to control the CO level to some extent this way. Leaning into the Burn Tunnel sent the carbon monoxide

Unblocking the entrance of the Burn Tunnel clears the exhaust gases. A simple plate, inserted in the Feed Tube parallel to the first brick over the Burn Tunnel, and at a slight distance from it --creating a slot-- keeps the entrance free at all times and easily resolves the problem. The best sized opening appears to be 5% of system size. The plate is a bit longer (hanging down under the ceiling of the Tunnel by a distance that is the same as the gap), which provides a better overall performance, to my own surprise. (Also see photos in Kirk’s case study, page 96). The plate induces some turbulence and adds fresh air into the process. The air heats up quite a bit and this air inlet proves to be self-regulating. When the air is heated on the way, there is resistance, because warm air needs to rise. The hotter the air gets, the higher the resistance is, so by heating up the stove, the entrance of air via this path is minimized automatically. The effect is increased turbulence and higher combustion temperature.

Introducing the Trip Wires and the Vortex

The perhaps most important addition is a trip wire. There’s actually no wire at all, it’s a term of art, used to name a feature which trips the laminar air stream to break up in small eddies. It’s a part of the Burn Tunnel ceiling coming down gently to end abruptly in a sharp ridge pointing downstream, like a wide arrow. The majority of the combustible gases -being the hottest- stream along the ceiling of the Tunnel. So I first shaped the ceiling in such a way that these gases converge in the middle. (The drawing below illustrates how it might look from above.) This was a very smart looking feature, the expected impact was there, but not as effective as I was hoping for.

The second way I’ve attempted to induce more turbulence was by rounding the back end of the tunnel. My goal at this detail was to minimize drag without killing the sought-after turbulence. Turbulators (anything that turns laminar flow into turbulent flow) are successful to some extent, so why not introduce this as an additional built-in feature? Of course this couldn’t easily be done in steel, so I made a Burn Tunnel assembly consisting of two halves made of castable refractory material. This worked well, but didn’t show in the results as a serious amendment. To make this more effective, I’ve shaped this curving back end more like an upside-down ski-ramp. (See drawing). 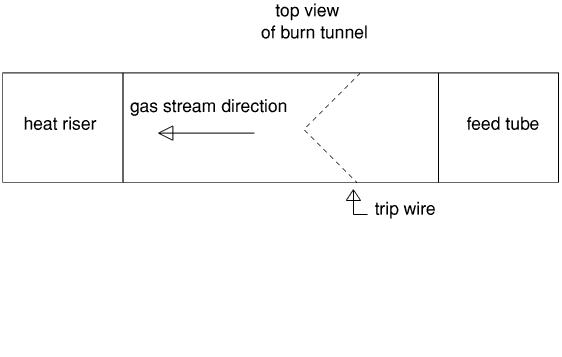 Starting smooth at the bottom and curving up to the Riser in a progressively shorter radius. The end of the back sweep acts as an additional trip wire further down the system. To make matters even more complicated, the radii left and right are not the same as the one in the middle, converging the stream by this way. Another, rather unexpected effect occurred with this: ashes are very reluctant to settle down on the ski-ramp: almost all particles were blown away and ended in the ash pit under the barrel. 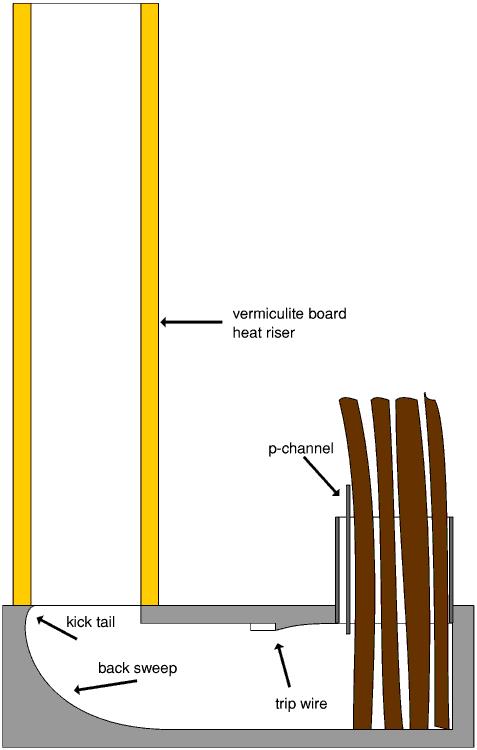 These three amendments together transformed the little stove into one that could handle a quite large overload of combustible gases. The high CO spikes were a thing of the past. Even a red-hot Burn Tunnel and a Feed Tube crammed full of thin pieces of fuel couldn’t get this dwarf to emit any smoke. I fiddled with other stoves in the past and was very happy to see the CO go down to less than 1000 ppm during the top of the burn.

To my surprise, this thing produced such low CO numbers I’ve never seen before, enough to call it the lowest numbers on the planet. And I do mean low, less than 50 ppm during every test-run to date and sometimes even zero.